What is the one thing that all 2D sketches have in common?

As you may have guessed from the title of this article the answer is planes. Any time you create a 2D sketch in SOLIDWORKS you have to start that sketch on a plane or a planer surface. Since you will not always have a planer surface to sketch on, you have to become proficient in creating planes since it is crucial to modeling efficiently.

Different Methods for Creating a Plane in SOLIDWORKS

This method is probably the simplest one and will be a good jumping off point for us.

Now we are going to hold Ctrl and left-click and hold on one of the control handles. 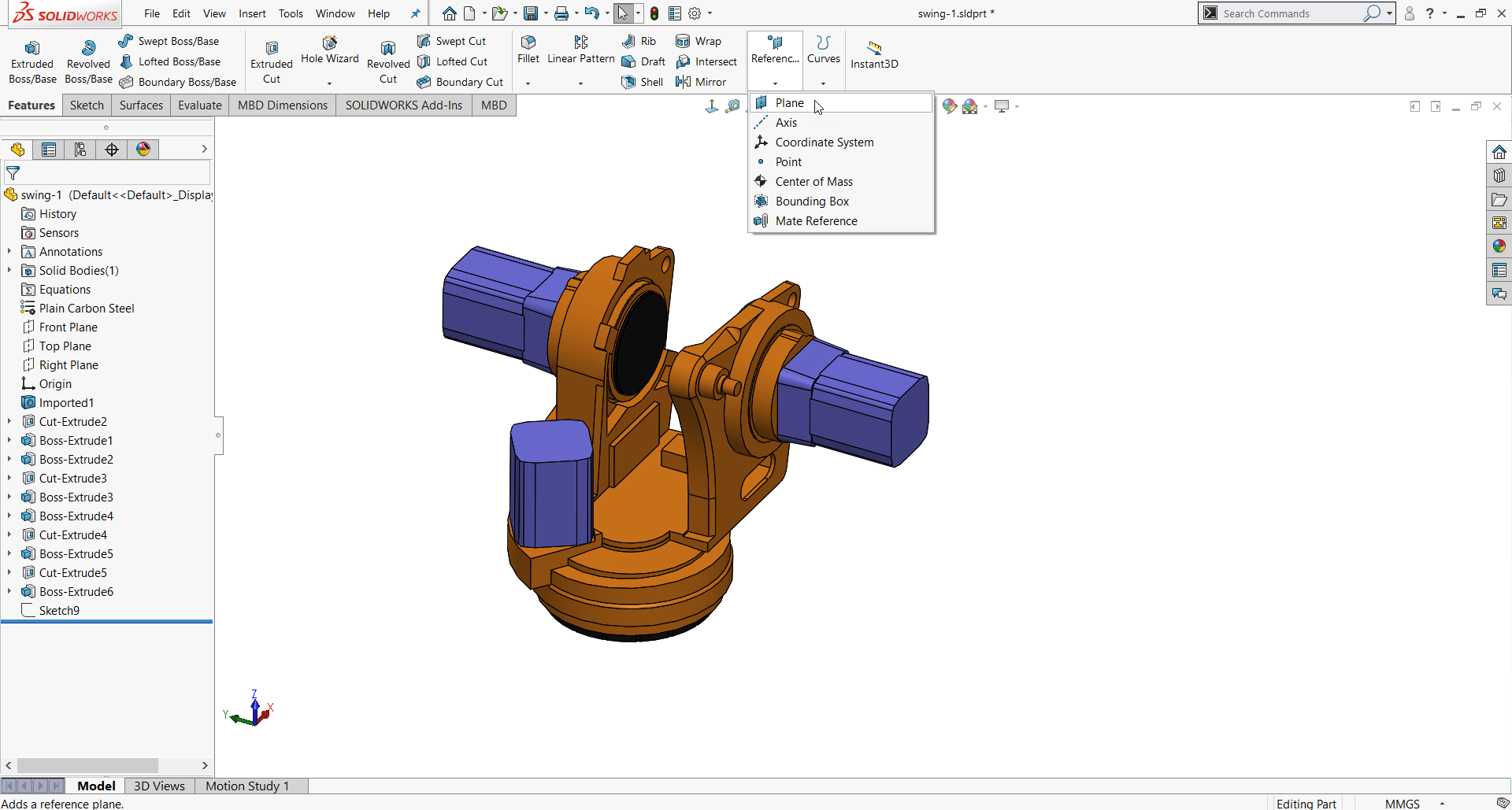 As soon as you do this, SOLIDWORKS automatically opens the new plane command and begins creating the plane for you. If you look in the command area on the left, you can see you have the ability to set an offset distance as well as flipping the offset and instance count of the plane.

Creating a Plane in the Middle of Two Surfaces

To create a plane that is in the middle of two surfaces, here are the options available to you.

On your Features tab click Reference Geometry, then Plane:

Then select two surfaces and you’re done. It’s that easy! 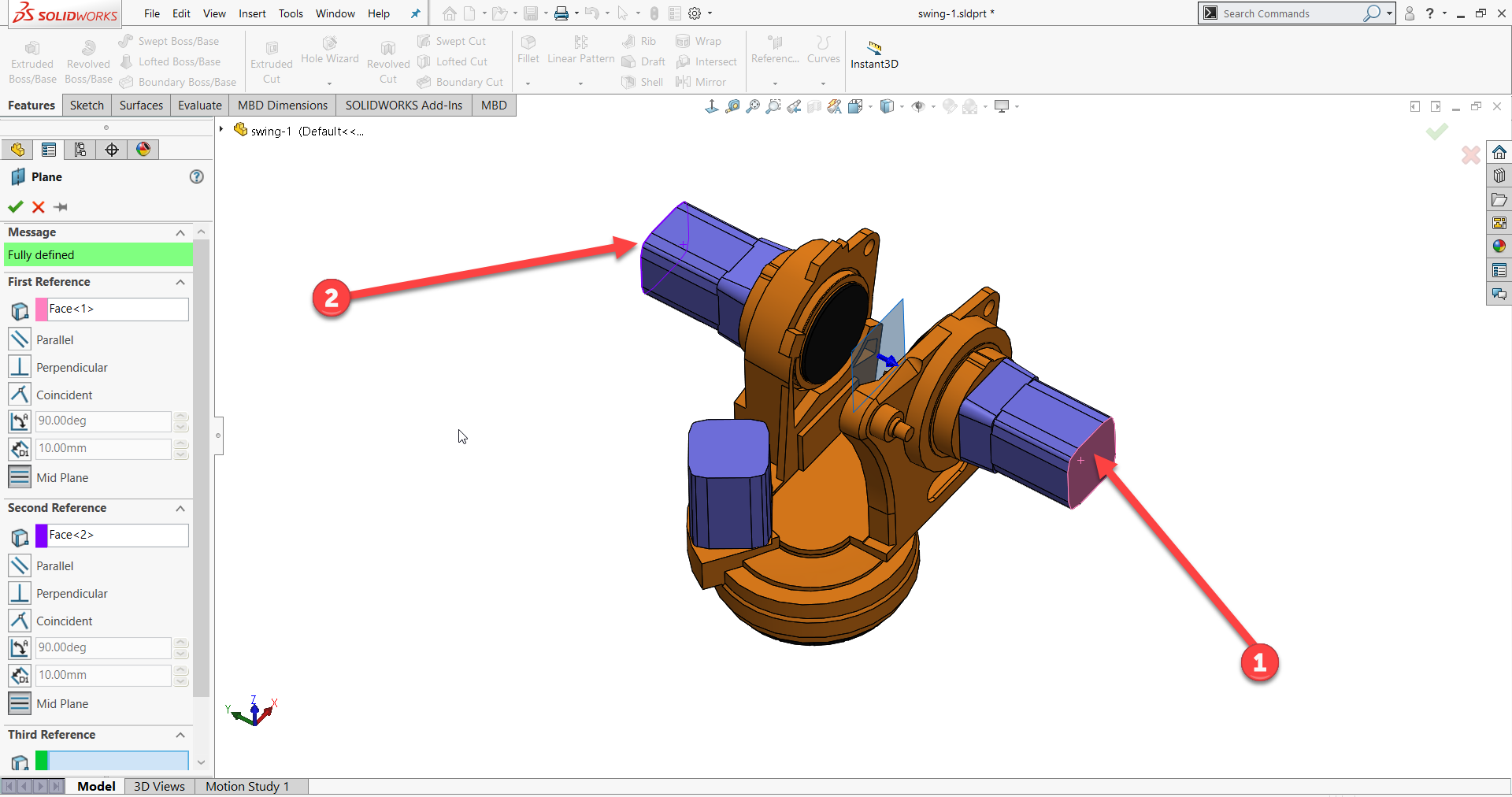 You may find that you need to create a plane at some angle that you cannot define from an existing geometry. That is not a problem because you can simply make a plane off reference sketches.

Creating a Reference Line on a Sketch

As you can see in the image below I have created a reference line on a face in a sketch. I am now using that sketch as a reference along with a face to create a plane at the angle of the line I drew. 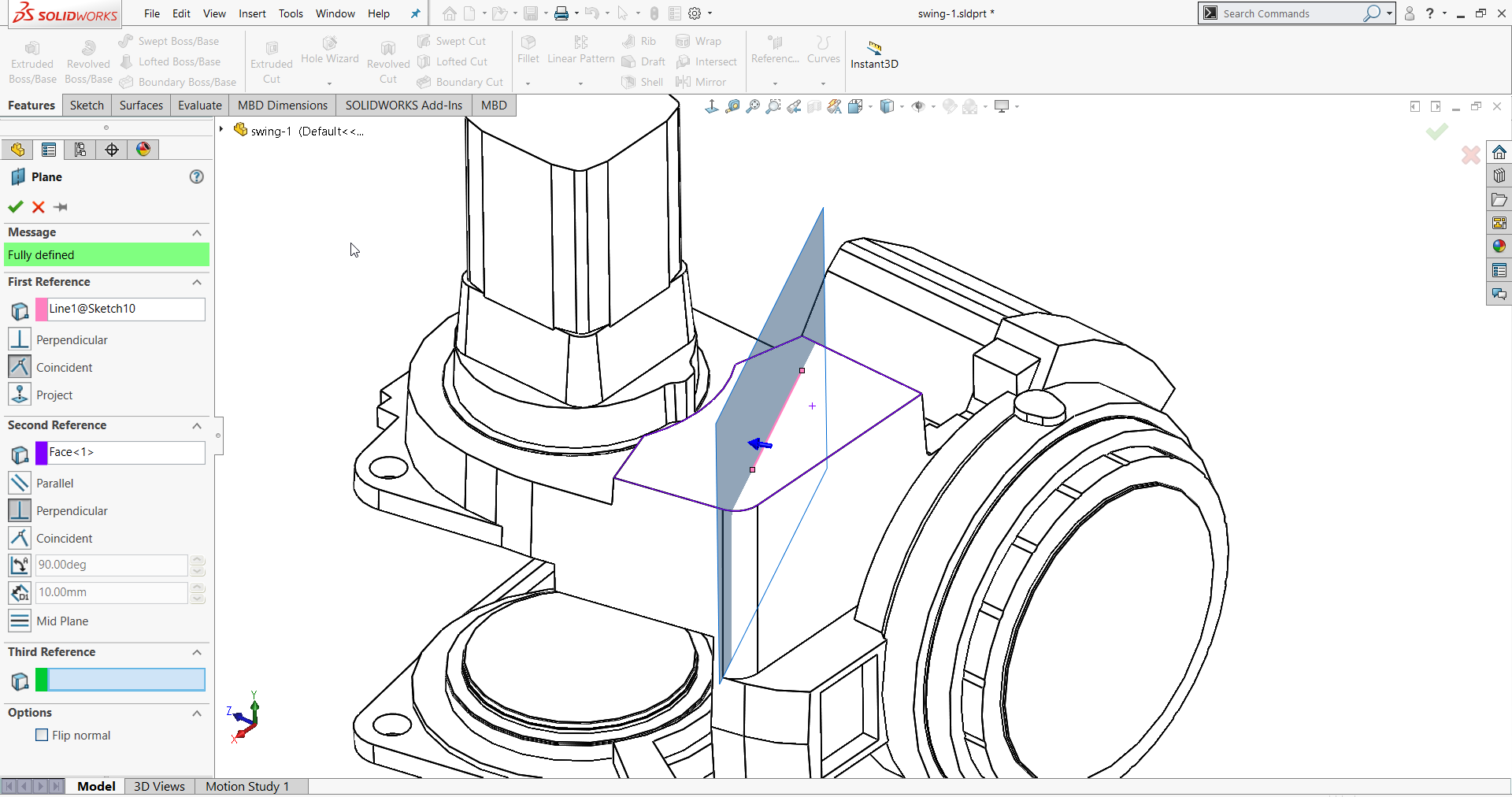 Perhaps you have a more complicated task of using a curvy face or sketch as a path of a sweep. Now you need to make a plane normal to the start point of the path. There is a very simple method to accomplish this.

Creating a Plane in a Sketch

Just left-click on the line and with it highlighted, start a sketch. You will see that SOLIDWORKS automatically creates a plane normal to the line for you. 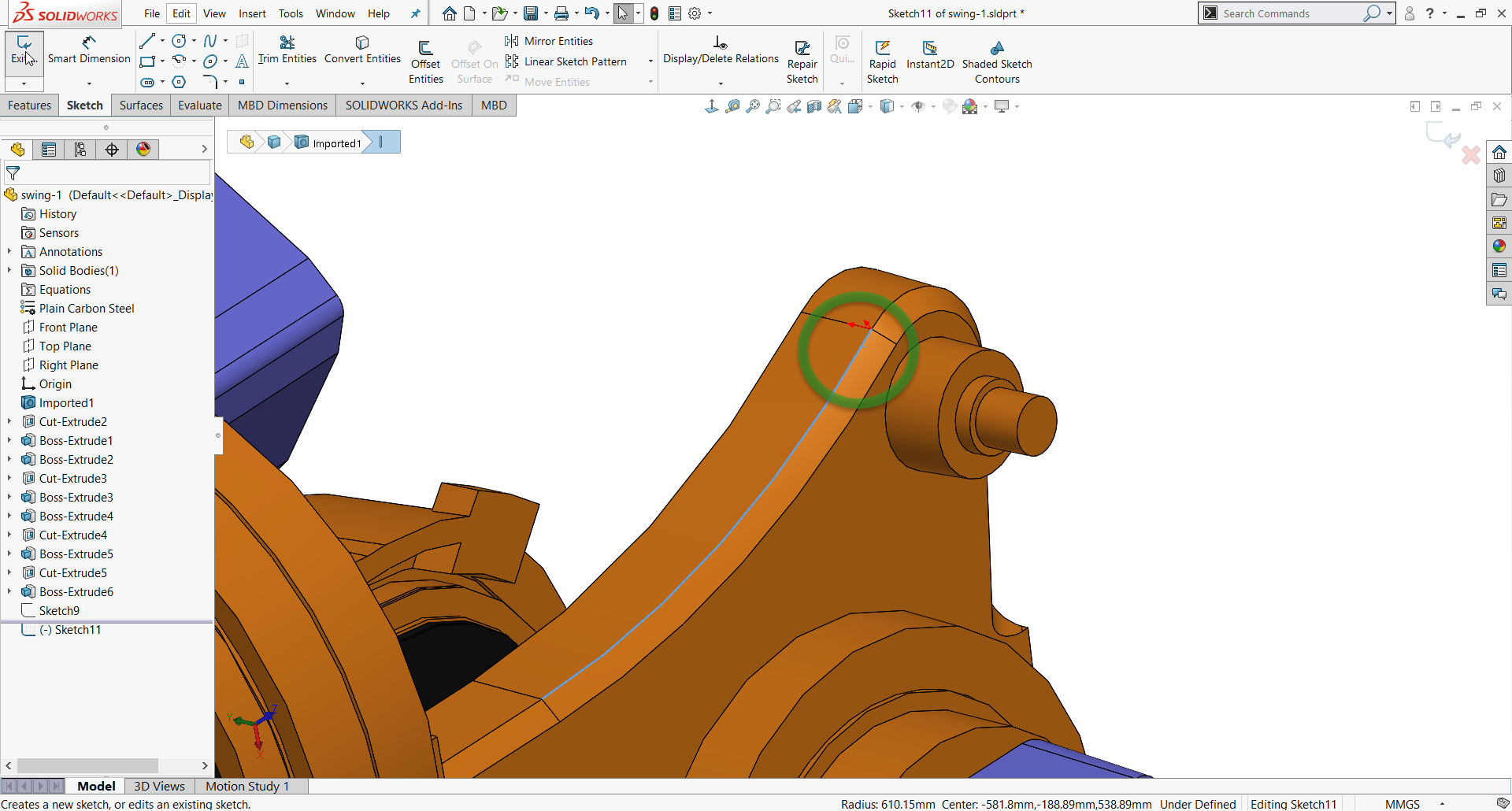 Creating a Plane from a Sphere’s Surface

By putting a 3D sketch point on a surface of a sphere I can use that point and the sphere’s surface to create a plane. 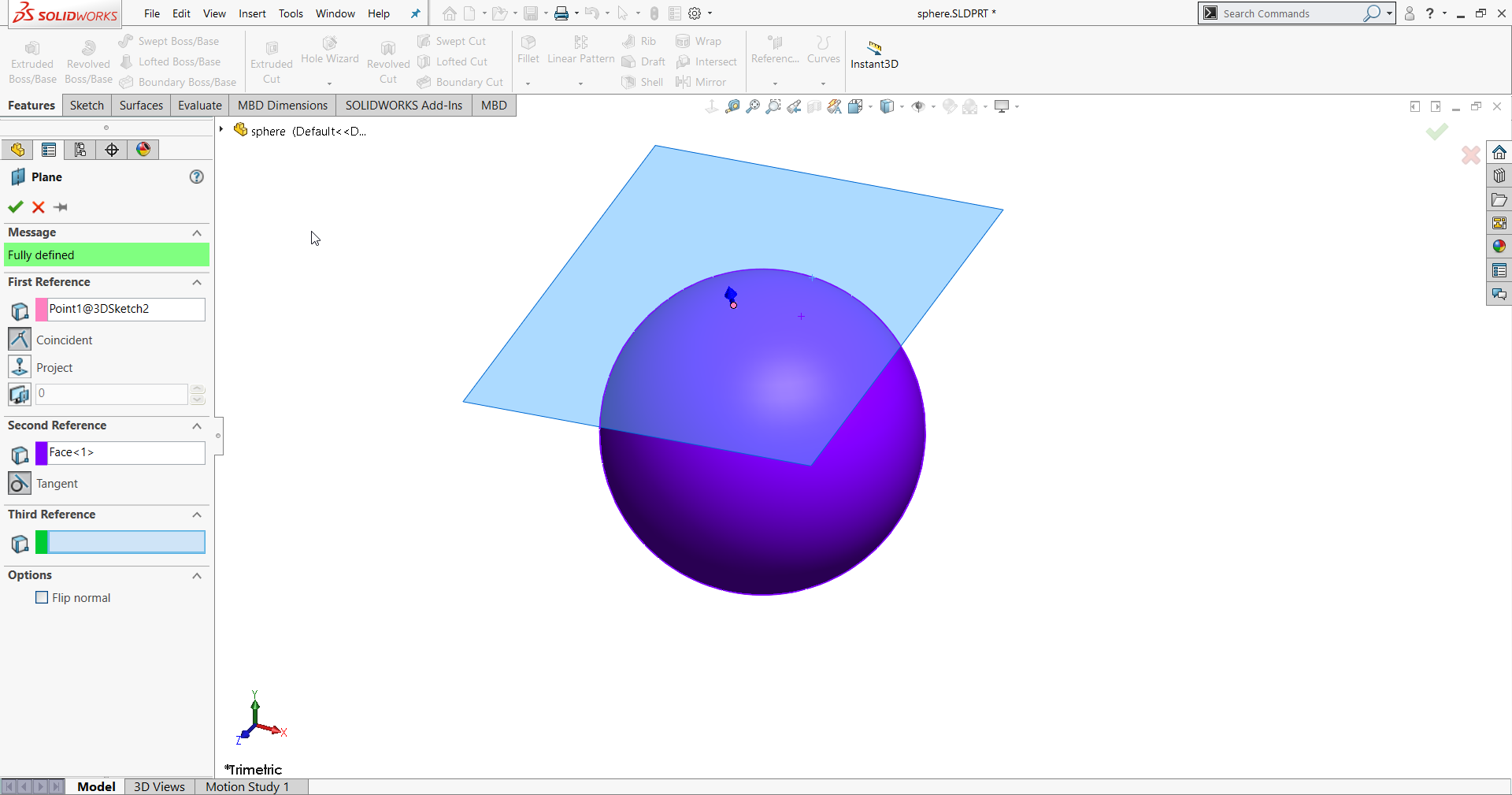 The last thing I will leave you with is something that is new in SOLIDWORKS 2015. The ability to create a plane normal to the screen. Yes, that’s right, the current orientation you have the model in will dictate the location of the plane.

Using the same sphere and point as last time, I have selected the point and clicked the button that the arrow is pointing to. This now creates a plane normal to the screen. If I change the orientation to the screen I can choose Update Plane and it will change back to normal to my new screen orientation. 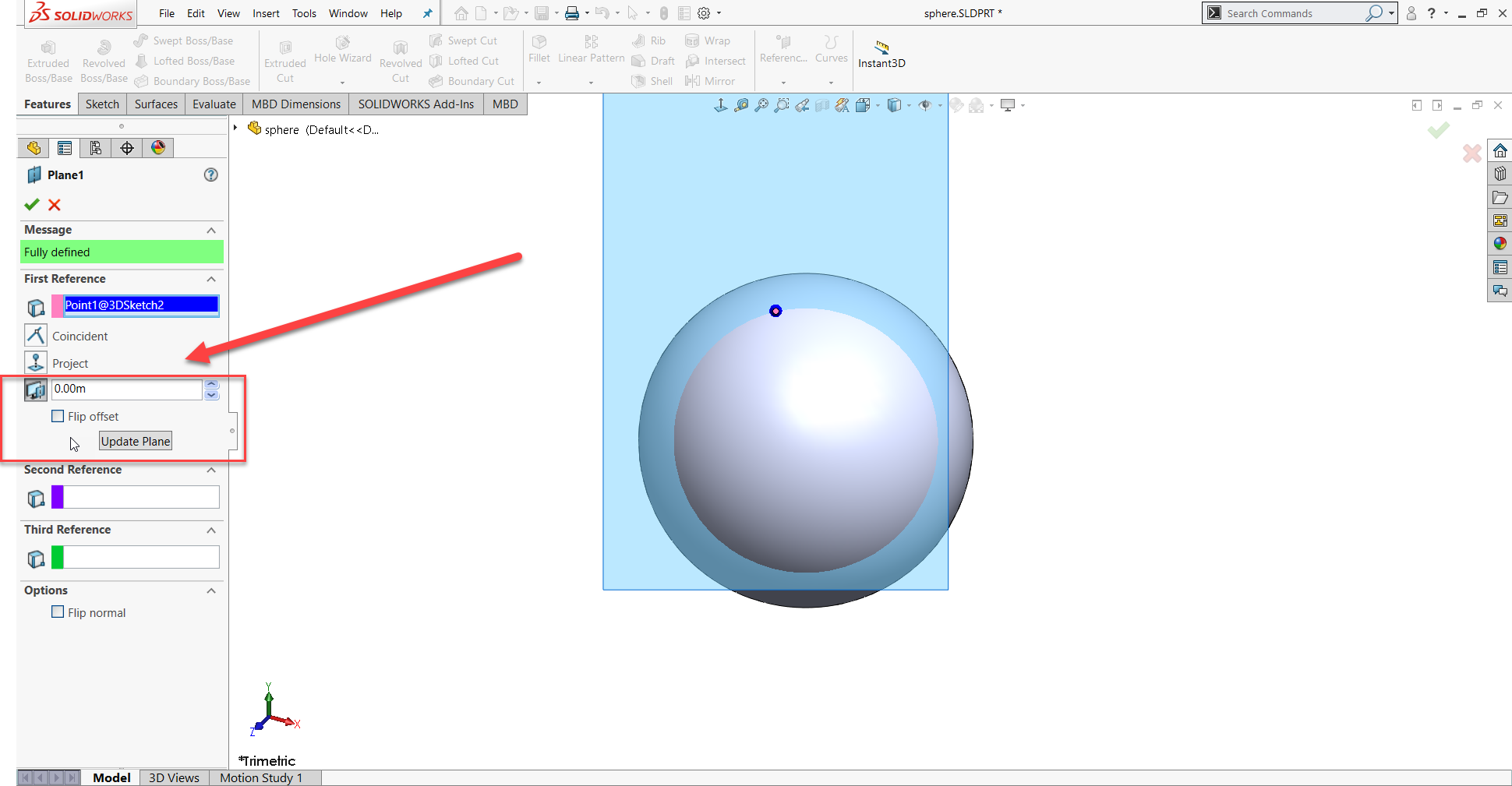 One thing to think about with this method of creating a plane is if there is no geometry locking the plane in place other than the point and the screen orientation. This would lead me to avoid this plane for certain things. But it is ideal as a cutting plane for a section view.

Hopefully, this has shown you some simple ways to be able to create planes in SOLIDWORKS. This is not meant to be an exhaustive list as you can find a multitude of ways to get the plane you need. Keep in mind that the order of selection can be critical. You may have the right selections but the wrong order. If the plane fails, try a different order- you never know, it might work.

Watch this process in our video, Working With SOLIDWORKS Reference Planes Part 1.