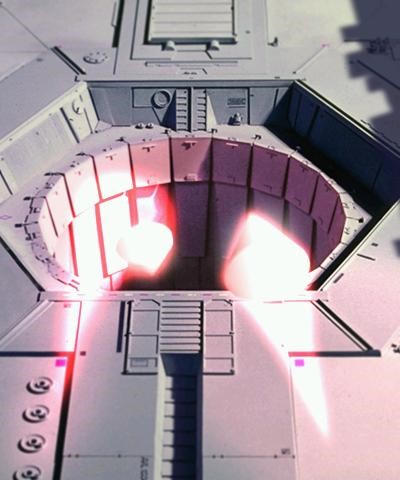 I’m a huge Star Wars fan, and have been for a very long time. And it doesn’t get much better than the final climactic moment from “A New Hope.”

Spoiler alert: (if you can spoil a 40-year-old movie) – In this moment, an under-fire Luke Skywalker pilots his X-Wing down the meridian trench and lobs two photon torpedoes into the Death Star’s only weakness: the thermal exhaust port.

As exciting as that moment is, ever since I was a little kid I’ve wondered why the weakness was there to be exploited in the first place. I know there’s been a lot of articles written about how mathematically infeasible the design actually is, such as this amazing article from Jamie Siedel at news.com.au that goes through the actual math behind the heat transfer of the system and Emily Litvak’s Risk Analysis of the Death Star from The University of Arizona.

I realize that the design has been retconned as an intended flaw recently due to some creative writing in “Rogue One,” so that answered a lot of questions. But the lone weakness of the port has always been one of those things that bugged me.

As a quick, fun project, I decided to model up the thermal exhaust port, and come up with a vent cover design for it. No offense to Galen Erso, but any engineer with a CAD tool like SOLIDWORKS could easily have designed a quick fix to his planned plot hole. Had the entire Death Star project not been rushed, someone would probably have caught this flaw in design review and they would have gotten a grate or vent to shield it better. The goal was to provide shielding while also monitoring the flow rate and maximizing the amount of flow through the opening.

To start, I had to model the exhaust port itself in SOLIDWORKS. It didn’t take me long because I wasn’t focused on the finer details. I just wanted to get it close enough to get the actual opening of the port correct. 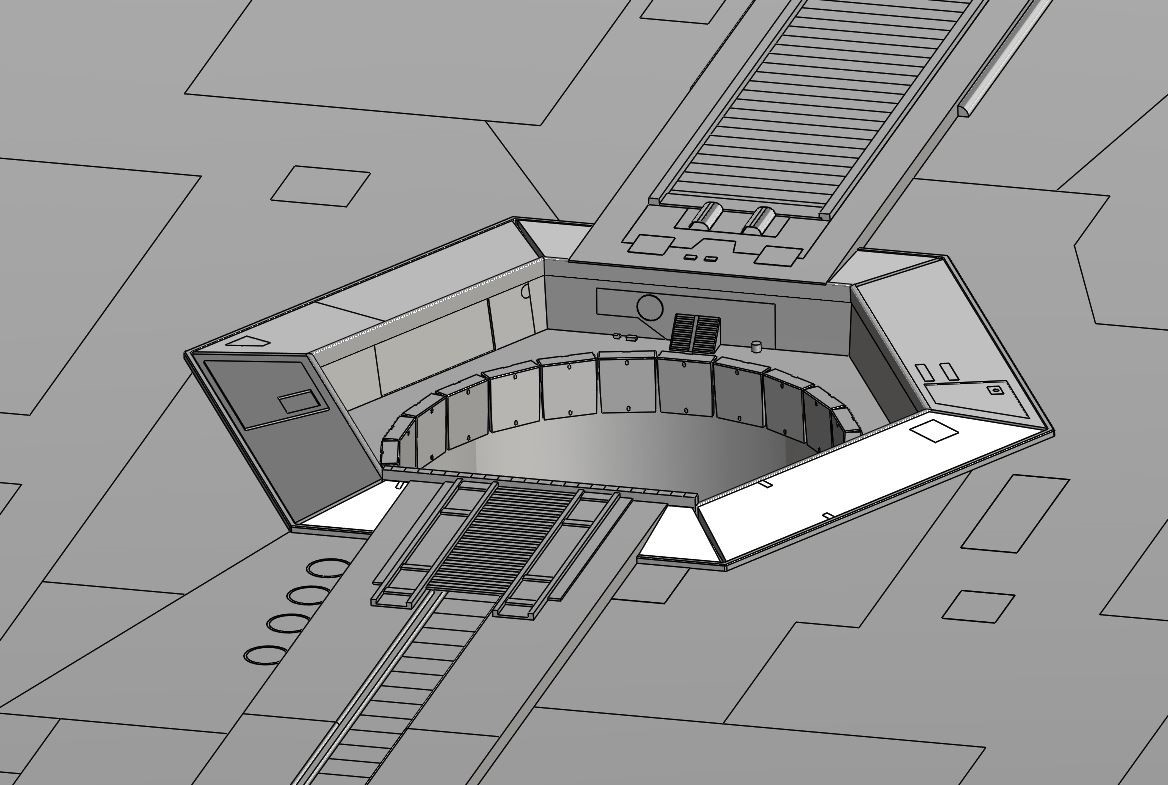 Here’s a comparison of the still I used for a reference above my 3D model: 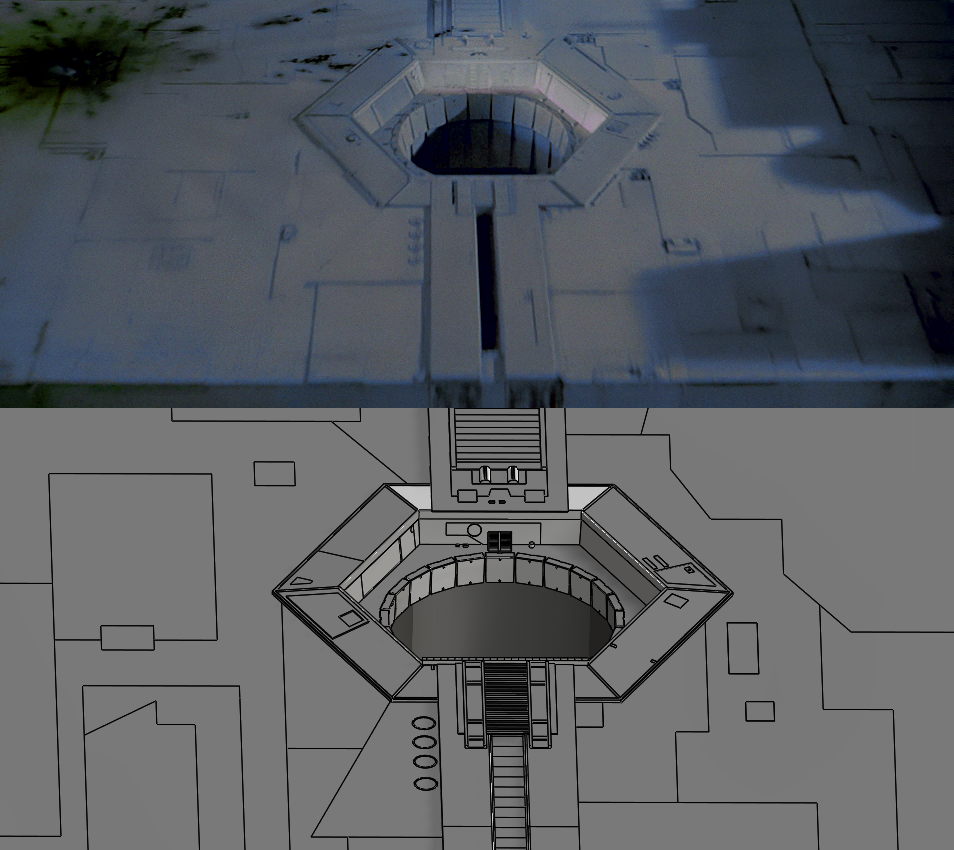 The port was a fun modelling project, and you can see I probably went a little overboard with detail. Sitting there with a still of the movie and modeling each little detail was a bit trickier than anticipated, but I think I did a pretty decent job. It made me a lot more respectful of the sheer amount of time and detail that Lucasfilm put into making the original models that were used on film. To put that much design time into something that only shows up on screen for mere seconds shows serious dedication and commitment.

The important part of modeling this in SOLIDWORKS was maintaining the canonical opening of two meters, roughly the size of a womp rat. As you can see, I was able to easily sketch this opening and maintain that with a sketch relation: 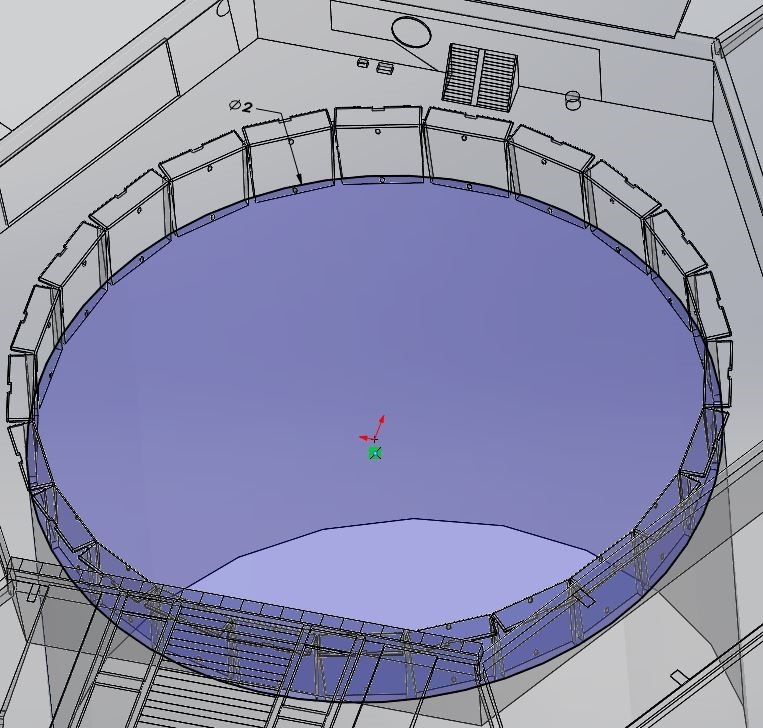 With that opening wide, the next step is to add a vent to it. Once I had the exhaust port designed, I just needed to add the grate cover. To do that, I simply needed to use the Vent feature in SOLIDWORKS. To prepare, I was able to close the opening with an extrude, then sketch out the intended shape of my grate. I roughed out a few quick ideas, but settled on a radial shape with spokes coming out the center. A quick circle sketch and a circular pattern gave me exactly what I wanted.

Here’s my sketch (under-constrained for a rough idea): 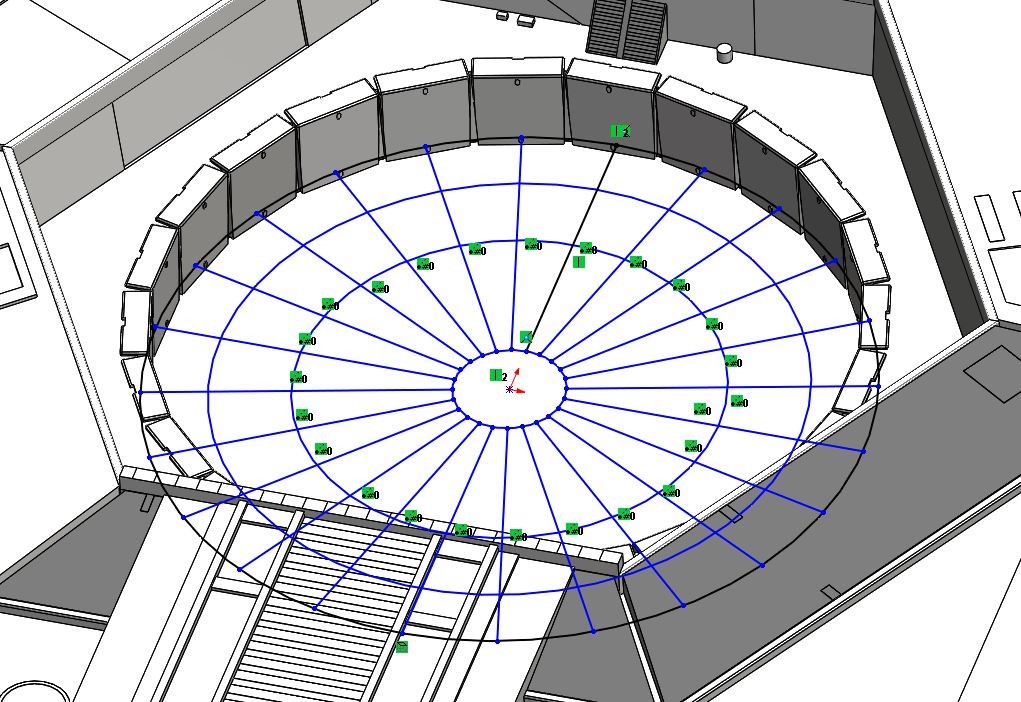 Once my sketch was in place, I could use the Vent feature in SOLIDWORKS to create the grate. With the vent feature you simply use different entities of the sketch to create the opening, ribs, spars and central fill-in boundary as needed. You’ll see that as you pick each entity, it will allow you to set dimensions, draft and offsets for each.

But it gets better – the best part of the feature is that it will live calculate both your flow area, and the percentage of opening that your vent design has. As you can see here, we opened up the geometry and it will first show a full flow opening of 100% with an area opening of 2.83 m^2. 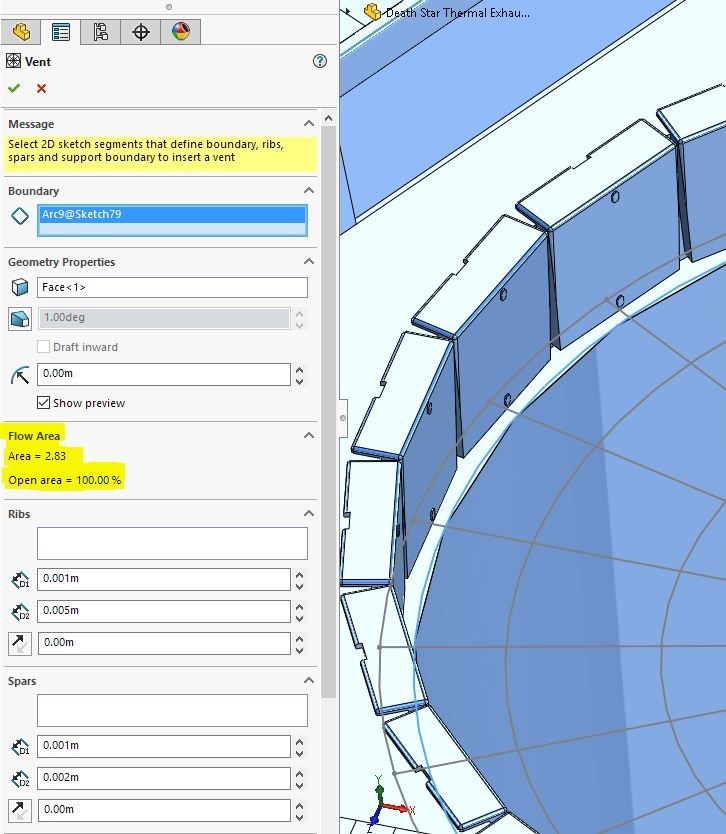 To add the ribs and spars, all I was doing was selecting sketch entities and setting the sizes as required. As you can see here, the flow area was restricted to 82.78% – not a bad loss for the amount of protection a simple grate cover would provide. 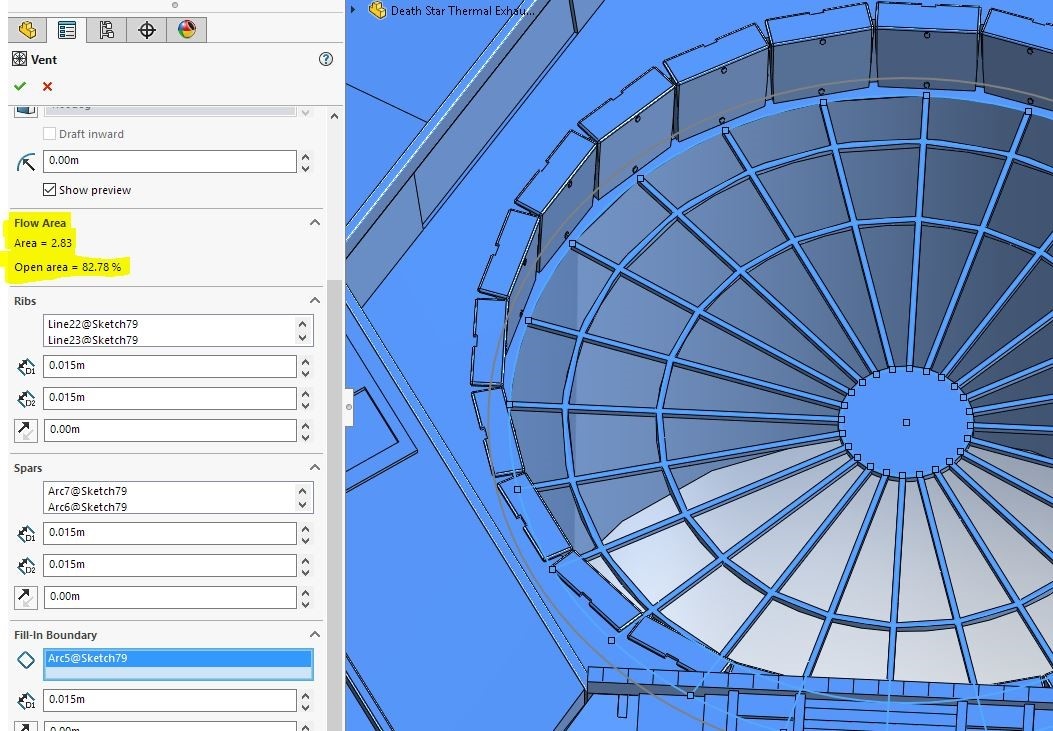 Here’s a quick snapshot of the final result: 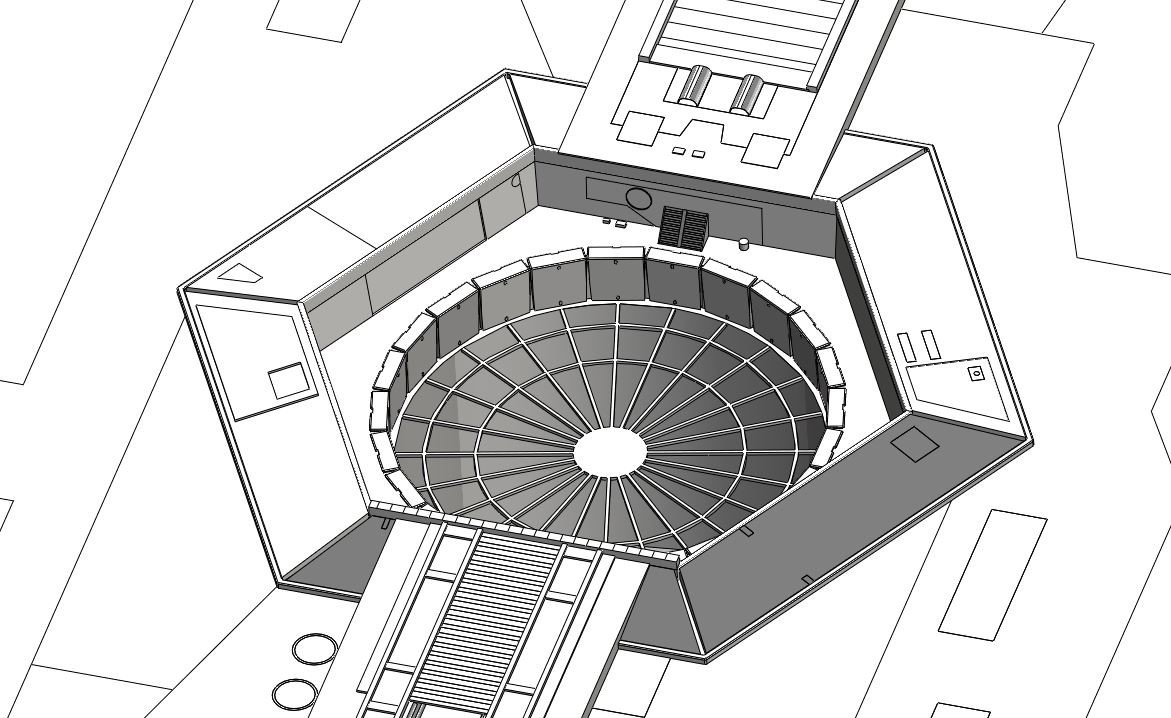 So that was my fun project – have a great Star Wars Day and May the Fourth be with you.

Have ideas about something you want to make? Comment below! After all, there is always more than one way to make your own solution!