Manufacturing Day is celebrated every year on the first Friday of October, this year falling on October 4th. It is a day to boast the amazing and valuable work that is created in America’s manufacturing and fabrication sectors and to change the public perspective on what it means to have a career in manufacturing. 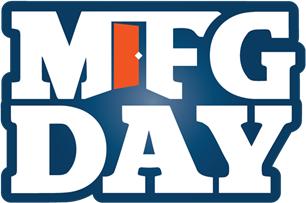 TriMech is no stranger to the world of manufacturing, with a large portion of our clients occupying some space in the design and manufacturing industries. Since the fabrication world is not immune to the passage of time, TriMech has been able to consistently supply the latest and greatest technologies to our clients in the form of additive manufacturing (AM). This allows our customers to stay on the forefront of what some refer to as “The New Industrial Revolution.” This moniker is given to 3D printing technology for good reason too, current advancements are revolutionizing the way we create and manufacture for the foreseeable future. Advancements in material science, allow to create stronger, more accurate pieces without the amounts of scrap material that exists with traditional subtractive manufacturing. AM also allows for new designs to see the light that previously were impossible to create with traditional methods. 3D printing also allows for fabrication technology to be even more widely available to those who previously did not have access to these tools before. For this year’s Manufacturing Day, I’d like to take you through the brief history of AM up through present-day technologies provided by TriMech.

The kick-start of AM began much earlier than some might think, almost 40 years ago in 1981, when Hideo Kodama of the Nagoya Municipal Industrial Research Institute, published information regarding the manufacturing of a solid printed model. A few years later, Stereolithography (SLA) was patented by Charles Hull, creating models by curing a liquid photopolymer resin using UV lasers. Hull later commercialized the first rapid prototyping system, greatly reducing the time for designers and engineers to create 3D concepts and prototypes.

It was around this time that Scott Crump invented Fused Deposition Modeling (FDM) technology. He patented this in 1989, forming Stratasys INC (but more on this later). It wasn’t until 1999 that scientists at the Wake Forest Institute were able to utilize 3D printing technology for medical applications – printing the synthetic scaffolds needed to grow a human bladder. While I’m sure this is the direction the technology will eventually head in, we aren’t quite there yet. In the current era of 3D printing, most of the printed organs are either non-functioning or they only survive a few days

The early 2000s were a fantastic time for additive technology, with advancements in printing that brought around the first commercially viable Selective Laser Sintering (SLS) machine, as well as the founding of Objet, which developed a machine that could mix multiple materials, allowing parts to be created with different material properties in different sections of the build. The decade’s other biggest AM event was the launch of MakerBot, bringing desktop FDM printing to the masses and causing a massive boom in 3D printing hobbyists.

Currently, AM is at a peak that just seems to continue growing. After Stratasys merged with Objet, PolyJet technology continues to improve year after year. The PolyJet process includes a carriage that jets photopolymers onto the build plate. Then, a UV light cures the material. This allows for the creation of both rigid and flexible materials in a single build. For any complex geometries, the printer creates a gel-like substance to act at support material, which is easily removed at the conclusion of the build. This technology allows for the creation of high-resolution parts with detailed features that can mimic the final resolution aesthetics desired for marketing and prototyping uses. While accuracy and resolution have continued to improve, prices have fallen drastically when compared to the genesis of the technology. Stratasys continues to create a new and exciting lineup of products. The J750, for example, delivers unmatched aesthetics, with capabilities that include full-color and texture mapping, while the F123 series provides a new entry point for industrial printing. These advancements and the technologies that are still to come, have had a huge impact on the traditional manufacturing floor – whether it be for traditional jigs, fixtures and tooling or more complex and precise medical applications. AM is here to stay, and the new Industrial Revolution is just getting started.

On this Manufacturing Day, remember the vast history behind manufacturing and fabrication, and don’t forget to look to the future, as new advancements are happening every day. We would like to wish a Happy Manufacturing Day to our clients present and future and know TriMech will continue to provide new and exciting manufacturing technologies for the years to come.

Now that you’re more familiar with Additive Manufacturing and 3D printing, click on the button below to download our 3D Printer Buyer’s Guide to learn more about the specs and options for some of the industries leading models.